The treatment of gastric cancer is radical resection, and the extent of resection varies depending on the location of gastric cancer. Typical examples are subtotal gastrectomy for lower gastric cancer, total gastrectomy or proximal gastrectomy for upper gastric cancer. Since the stomach has the function of digesting and absorbing food, when gastrectomy is performed, malnutrition may occur and the degree of malnutrition may vary depending on the extent of gastrectomy [4]. Body weight loss and anemia are representative complications caused by nutritional disorders after gastrectomy, and among them, anemia is caused by a deficiency of ferritin or vitamin B12 [5,6]. In cancer patients, anemia is associated with a decrease in quality of life and may impair the effectiveness of chemotherapy after surgery, which may eventually worsen the outcome of treatment [4,7,8].

A retrospective comparative analysis was performed based on the collected data. For continuous variables, the P-value was calculated with the Mann-Whitney U-test or the independent sample t-test. The result was presented as the mean ±standard deviation or the median (1st quartile~3rd quartile). A P-value less than 0.05 was defined as statistically significant, and for statistical analysis, an Excel-based statistical analysis program, Rex (Version 3.0.3; RexSoft Co. Ltd., Seoul, Korea), was used.

This study was approved by the Institutional Review Board (IRB) of Soonchunhyang University Cheonan Hospital (IRB file number: SCHCA 2021-01-015). Written informed consent was obtained from the patients to report and publish individual patient data.

1. Clinicopathological characteristics of the patients

2. Comparison according to the extent of gastrectomy

Comparison of outcomes according to extent of gastrectomy 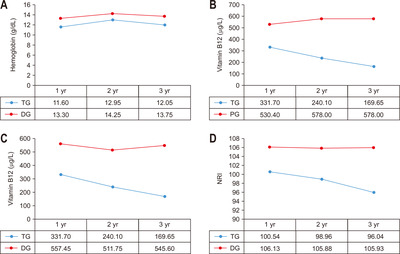 3. Comparison according to reconstruction method

In the group that underwent distal gastrectomy, the group underwent gastro-duodenal anastomosis, and the group that underwent gastro-jejunal anastomosis according to the reconstruction procedure. The NRI was compared and analyzed before surgery and for 1~3 years after surgery. There was no statistically significant difference between the two groups in the pre-operative indices. There was no statistically significant difference in the post-operative indices between the two groups. The ferritin level was higher in the group with gastro-duodenal anastomosis at 1~2 years after surgery, but it was not statistically significant (median for each group, 1 year post-surgery: 69.25 ng/mL vs. 46.10 ng/mL, P-value=0.073, 2 years post-surgery: 59.25 ng/mL vs. 34.05 ng/mL, P-value=0.065) (Table 3, Fig. 2).

Comparison of outcomes according to reconstruction method in distal gastrectomy group 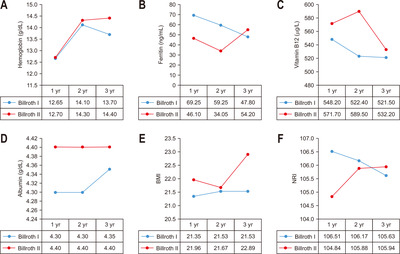 Various nutritional changes can occur after gastrectomy, and malnutrition after gastrectomy is a factor related to poor prognosis after surgery in gastric cancer patients [11]. Recently, interest in the quality of life after surgery has increased as the long-term survival rate has increased due to early diagnosis and improvement in surgical outcomes in gastric cancer. For this reason, studies on nutritional changes that may occur after gastrectomy are being actively conducted. Previously, in evaluating and comparing the extent of resection or reconstruction type in gastric cancer patients, the focus was on safety from an oncological point of view and fewer complications directly related to the surgical procedure. On the other hand, relatively few studies have compared the difference between the extent of resection and the reconstruction type from a nutritional point of view. Furthermore, malnutrition increases postoperative complications and is known to increase the risk of postoperative infection as it causes immunodeficiency in particular [11]. This also lengthens hospital stay, which is why screening and correction of malnutrition are important in cost-effectiveness.

One of the most common nutritional complications after gastrectomy is anemia. It is mainly caused by a deficiency of ferritin and vitamin B12 after gastrectomy [4,6,7]. It is known that ferritin deficiency after gastrectomy is influenced by decreased gastric acid secretion, duodenum and upper jejunum bypass, and rapid intestinal transit [7,12]. Vitamin B12 deficiency is due to a decrease in intrinsic factor, which is secreted in parietal cells of the stomach. It is known to play an important role in the absorption of vitamin B12 [13]. It is said that anemia occurs in about 18% of patients who have undergone radical resection for gastric cancer [12]. In a large cohort study, anemia occurred in 18.7% of patients 1 year after surgery and 39.5% within 5 years after surgery [7]. Regarding the extent of resection, it is known that total gastric resection has a higher risk of anemia than partial resection [4]. In this study, hemoglobin levels and vitamin B12 levels were significantly lower in the total resection group than in the partial resection group. Since it is known that the maximum absorption of ferritin occurs in the duodenum and the upper jejunum, it is theoretically possible to develop anemia in the gastro-duodenal anastomosis, considering that the bypass mechanism causes the loss of the mucosal surface necessary for the absorption of ferritin and contributes to the development of anemia. Although this is expected to occur low [14], reports show no significant difference between gastro-duodenal anastomosis and gastro-jejunal anastomosis after partial resection [4]. Studies showing differences between the two groups were rare, and most did not show a significant difference. There was no statistically significant difference between the two groups in this study. However, although it was not statistically significant in this study, ferritin levels were higher in the group undergoing gastro-duodenal anastomosis until 1~2 years after surgery. Considering the small population, additional validation through follow-up studies is likely to be necessary, and additional study through long-term follow-up is needed for early gastric cancer patients who are expected to survive long-term for other variables except for ferritin. In a study on iron and vitamin B12 supplementation for the prevention or treatment of anemia, a recent prospective randomized clinical trial demonstrated that iron supplementation via the intravenous route was effective in postoperative anemia patients with gastric cancer [15-17]. In addition, several studies have reported that oral administration of vitamin B12 is effective in gastrectomy patients [13,18]. Therefore in total gastrectomy patients, who are more susceptible to malnutrition, we can prevent postoperative anemia in this pathway. Additional studies are needed to establish an additional iron and vitamin B12 supplementation protocol according to the extent of gastrectomy and the type of reconstruction for the patient group with expected long-term survival in the future.

The results of this study confirmed that there was a significant difference in nutrition between total gastrectomy and distal gastrectomy. However, from a nutritional point of view, there was no statistically significant difference from proximal gastrectomy, which is a partial gastrectomy for upper gastric cancer patients. Furthermore, in a comparative study of postoperative outcomes through long-term follow-up between the two groups, there were no differences in oncological outcomes or postoperative complications. Considering that the group that underwent proximal gastrectomy showed a less decrease in hemoglobin level, less weight loss, and less incidence of severe gastroesophageal reflux compared to the group that underwent total gastrectomy [21], there was likely no difference due to small patient numbers in this study, and needs to be supplemented through follow-up studies.

The authors of this manuscript have no conflicts of interest to disclose.