As survival of gastric cancer improves, there is an increasing interest in the management of QoL after gastrectomy. Nowadays, QoL has become one of the critical outcomes that should be factored into selecting a proper treatment plan. Several studies have demonstrated immediate deterioration in various functions and symptoms of QoL and gradual improvement in the first postoperative year after gastrectomy [3-8]. However, previous studies mostly focused on the patients undergoing subtotal gastrectomy, and detailed aspects of the functions and symptoms of QoL after total gastrectomy remain poorly investigated.

Many studies that analyzed the QoL after gastrectomy used a score-based comparison between the different groups or different time periods. However, this method has limited clinical value because it only shows the difference in scores without reflecting clinically meaningful QoL change [9]. To make the QoL data more clinically relevant, many researchers have suggested the concept of minimally important difference (MID) in interpreting QoL [10]. MID refers to a score change that patients would perceive as important, defined as an effect size of >0.5. MID is clinically useful to classify patients into those with and without deterioration of QoL and investigate the extent of impairment in various functions and symptoms of QoL. In this study, we investigated the longitudinal change of QoL after total gastrectomy using the MID-based approach.

This study was performed in a gastric cancer clinic at a tertiary teaching hospital in South Korea. Patients with gastric cancer aged 18 to 85 years who were expected to undergo total gastrectomy were eligible for this study. We excluded patients with other malignant diseases and those who received preoperative chemotherapy or underwent a non-curative gastrectomy. Between January 2016 and December 2017, 206 eligible patients were enrolled, and 170 patients provided a complete response to the QoL surveys from their initial preoperative visit and at the postoperative follow-up visits (months 1, 6, and 12). This study included these 170 patients to investigate the longitudinal change in QoL after total gastrectomy.

All patients underwent open or laparoscopic total gastrectomy. Laparoscopic surgery was indicated for clinically T1-2N0 tumors on the preoperative staging. D1+ or D2 lymphadenectomy was performed as appropriate based on the gastric cancer treatment guidelines [11,12]. After gastric resection, Roux-en-Y esophagojejunostomy was performed in all patients. Postoperatively, patients with stage II or higher cancer received adjuvant chemotherapy with oral fluoropyrimidine (TS-1) or capecitabine plus oxaliplatin.

Patients were routinely followed-up postoperatively at 1, 6, and 12 months in the first postoperative year. Thereafter, patients were regularly followed-up every 6 months until 5 years after surgery. During the follow-up, patients received an abdominal CT scan every 6 months and endoscopy every 12 months. The institutional review board at our institution (Chonnam National University Hwasun Hospital, South Korea) approved this study (IRB No.: CNUHH-2020-268), which waived the requirement of informed consent of patients, considering that this study was an observational study without interventions.

Patients were asked to fill out the QoL questionnaires preoperatively and at postoperative 1, 6, and 12 months. The questionnaire responses were self-reported by patients, although a specialist nurse assisted patients who had difficulty reading or completing the questionnaire.

Scores in each subscale and symptom were linearly transformed to a 0 to 100 score following the EORTC QLQ-C30 and STO22 scoring manual [17,18]. Missing values were handled in accordance with the standard protocol described in the EORTC QLQ-C30 scoring manual [17]. Briefly, missing items were assumed to have values equal to the average of those present for that respondent for multi-item scales. For single-item measures, the patient’s previous responses to the same item were used for imputation.

MID refers to a score change that patients would perceive as clinically important. We determined the MID for each subscale and symptom of the QLC-C30 and STO22 based on the standard deviation of the baseline score. An effect size (score change/standard deviation) of >0.5 was regarded as MID for each subscale [19]. Using the MID, we investigated the proportions of patients who experienced score changes greater than the MID at each time point.

We also investigated the factors associated with the QoL recovery. The global health status can serve as a single representative domain that reflects the overall QoL. Therefore, we analyzed the association between various clinicopathological factors and MID in global health at postoperative 12 months. We selected nine possible factors (age, sex, body mass index, comorbidity, operative approach, the extent of lymphadenectomy, tumor stage, postoperative complication, and adjuvant chemotherapy) with reference to the researchers’ opinion and previous reports. 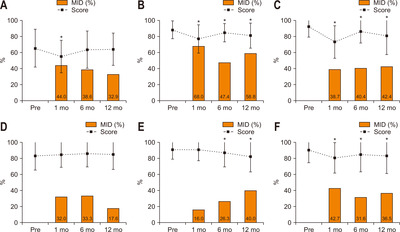 Fig. 2 shows the longitudinal change in scores and proportions having MID in QLQ-C30 symptoms. At postoperative 1 month, the scores of most symptoms (except for constipation) significantly increased (worsened) compared to the preoperative level. MID was most frequently observed in appetite loss (52.9%), followed by fatigue (49.4%), pain (47.1%), insomnia (38.8%), and diarrhea (38.8%). At postoperative 12 months, most symptoms remained significantly changed except for pain, constipation, and financial difficulties. MID was most frequently observed in diarrhea (52.9%), followed by fatigue (42.4%), nausea/vomiting (41.2%), appetite loss (34.1%), and pain (32.9%) at postoperative 12 months. 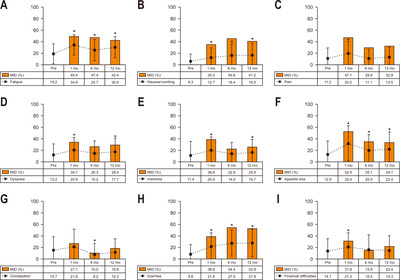 Fig. 3 shows the longitudinal change in scores and proportions having MID in STO22 symptoms. Hair loss was excluded from this analysis because of the low response rate. At postoperative 1 month, most symptoms (except for reflux) showed a significant increase (worsening) compared to the preoperative level. MID was most frequently observed in eating restrictions (74.1%), followed by dysphagia (63.5%), pain (51.8%), anxiety (50.6%), and body image (41.2%) at postoperative one month. At postoperative 12 month, most symptoms remained significantly increased except for dry mouth. MID was most frequently observed in eating restriction (63.5%), followed by body image (55.3%), pain (55.3%), dysphagia (52.9%), and anxiety (51.8%) at postoperative 12 months. 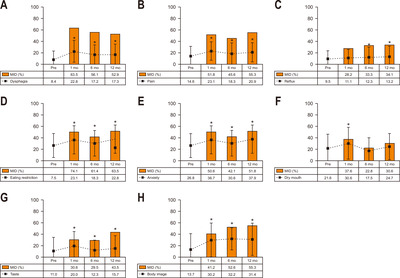 Factors associated with MID in global health at postoperative 12 months

In this study, we used a different approach to interpret QoL, the concept of MID [9]. A common method to analyze QoL data was a score-based comparison between the different groups or different periods in previous studies. However, this information is usually unrealistic or less informative because the statistical difference of the mean scores does not necessarily indicate a clinically relevant difference in QoL. Instead, many researchers have suggested using MID in reporting QoL data to provide more practical information [9]. MID is defined as the smallest change of the QoL score (effect size of >0.5) that patients would perceive as clinically important [10]. MID enables clinicians to identify patients who experienced a clinically relevant change in QoL.

Using the MID-based approach, we can understand detailed aspects of QoL after total gastrectomy. For instance, our study showed that of diverse functions, physical function was most severely affected throughout the postoperative period. The cognitive function worsened as time passed, while other functions remained unchanged or only mildly improved. Regarding the symptoms, we found that eating restriction, dysphagia, appetite loss, pain, and anxiety are relatively frequent symptoms that patients experienced MID (all>50%) at postoperative 1 month. At postoperative 12 months, MID was frequent (>50%) in eating restriction, body image, pain, diarrhea, dysphagia, and anxiety. Thus, we can understand which functions and symptoms of QoL are mostly affected at different postoperative periods. Based on this information, we can develop an appropriate care plan for QoL focusing on the main problems of patients.

In previous reports, operative approach [22], tumor stage [5], postoperative complication [23], or the type of gastrectomy [4,5] were the main factors that affected postoperative QoL. Some studies showed that old age was associated with poor QoL after a gastrectomy [24,25]. Based on this, we included these factors and other clinically relevant factors to construct the predictive model for QoL recovery. For this, we designated the global health status as a primary outcome because it can represent the overall status of the patient’s QoL. We found that male sex, comorbidity, D2 lymphadenectomy, and postoperative morbidity were the main factors that were associated with MID in global health at postoperative 12 months. Patients with these clinical conditions may require careful attention with regard to QoL. Besides, D2 lymphadenectomy should be carefully decided in selected patients, and the efforts to reduce postoperative morbidity will also be helpful to improve QoL after total gastrectomy.

Some researchers have suggested proximal gastrectomy as an alternative, particularly for early-stage gastric cancer, because of the poor QoL after total gastrectomy. Some studies demonstrated that proximal gastrectomy resulted in less weight loss, diarrhea, and dumping symptoms compared to total gastrectomy [26,27]. However, the superiority of QoL with proximal gastrectomy remains controversial because of little benefit regarding the postoperative QoL in other studies [28]. Meanwhile, cognitive-behavioral therapy is a commonly used technique for the treatment of various psychiatric diseases. Recently, this technique has been increasingly used to improve QoL in cancer patients, especially in breast cancer [29]. In our institution, we are developing a postoperative rehabilitation program that adopts cognitive behavioral therapy to help patients cope with various clinical problems related to gastrectomy. We expect to demonstrate the effects of this program on the patient’s QoL in the future study.

There are some limitations in this study. First, this study was performed in a single high-volume institution that had a well-organized gastric cancer clinic. This may limit the generalizability of our findings. However, this longitudinal study in a large cohort of patients will be informative to understand the general picture of QoL after total gastrectomy. Second, many patients had early gastric cancer, and only 32.9% received adjuvant chemotherapy. Therefore, different aspects of QoL in patients undergoing adjuvant chemotherapy may require further investigation. Lastly, the follow-up period was relatively short to determine the long-term QoL. Information about long-term QoL may be more helpful to guide the proper management of QoL.

The authors of this manuscript have no conflicts of interest to disclose.